Agents of Mayhem Wiki
Register
Don't have an account?
Sign In
Advertisement
in: Agents, Carnage a Trois, Saints Row Characters,
and 4 more

Yeti, A.K.A. Oleg Kirrlov, is a M.A.Y.H.E.M. field agent and a part of Carnage a Trois, alongside Braddock and Daisy. He is one of the Saints Row characters that appears in Agents of Mayhem.

In the aftermath of Devil's Night, rogue elements in Russia's government and military organized a secret opposition to L.E.G.I.O.N, the New Revolutionary Council. Oleg Kirlov, a soldier in an elite unit of the Russian army, was among the first to join. The NRC initiated Russia's top-secret "Cold Warrior" program to build an army of super-soldiers that could help the fight L.E.G.I.O.N.

Unfortunately, most who volunteered were driven mad by the process. Oleg was one of the few who retained his sanity and brilliant mind. Months later the Council was betrayed by a Cold Warrior who believed that L.E.G.I.O.N. offered the best path to restore Russia's greatness. Most of the Council was arrested and executed. Oleg escaped Russia and joined MAYHEM.

Yeti's vehicle is the Eiswolf, the name of his vehicle skin is "Russian Bear" and the general appearance of his car is a Blue paintjob covered in ice, there are a few other differences light the front bumper and the roof lights but other than that, the car is mostly stock 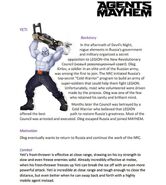 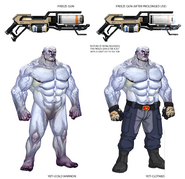 YETI fanart done by Claparo-Sans as part of the DeviantArt's After Hours project.