Scheherazade, is a M.A.Y.H.E.M. field agent and a part of the Firing Squad, alongside Oni and Kingpin.

To unlock Scheherazade as a playable character, players need to complete Operation: Dimensions of the Ninja.

The origins of this Middle Eastern assassin are shrouded in mystery. And she prefers it that way. Her backstories are numerous--and one of them may even be true. But the only member of MAYHEM with insight into this woman's past is another secretkeeper: Persephone Brimstone.

Scheherazade's special causes her to throw projectiles at enemies that cause different effects to them. The cooldown by default is .

Scheherazade uses a sword to deliver deadly melee attacks as her default weapon attack. She also has ranged throwables that fire in 2-round bursts while she aims down the sights or is in mid-air. 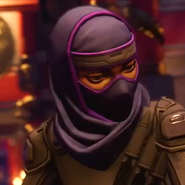 Promotional image of Scheherazade featured on Xbox One Store

Scheherazade fanart done by elsevilla, as part of the DeviantArt's After Hours project