Ingo Rotkapp, A.K.A. Red Card, is a M.A.Y.H.E.M. field agent and part of the Bombshells, alongside Joule and Rama.

Ingo used to describe his job as the #1 Ultra-Fan for German soccer club FC Ruedesheim. By the time LEGION had started targeting sporting events, Ingo had earned his notoriety as a brutal hooligan. After inciting a riot against LEGION during a championship game, Persephone decided that even a loose cannon like him could be the perfect weapon at the right time.

He is very aggressive, especially when it comes to soccer. It is mention that on Devil's Night, he was biting off the ear of a fan of a rival team. 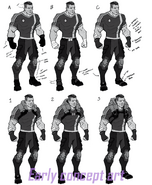 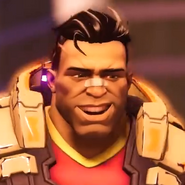