Oni, A.K.A. Masamune Senichi Is a M.A.Y.H.E.M. field agent and apart of the Firing Squad, alongside Kingpin and Scheherazade.

The son of a Japanese businessman, Senichi shamed his family by entering the world of organized crime. But when he discovered that the Boss of his family was taking orders from the Ministry of Greed, he brought down the organization from within. When MAYHEM ran across him taking on a Yakuza army all by himself – and winning – Persephone had to have the man on their side.

Oni's Vehicle is a custom Torch, His vehicle skin is called "Speed Demon" and the major differences of his car is the front bumper and splitter, the rear bumper and lights, the large spoiler on the rear and the wheel arches. the paintjob of his car is primarily red with some purple designs 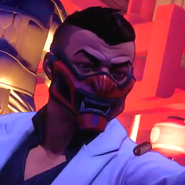 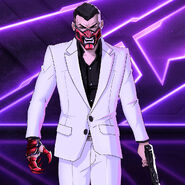 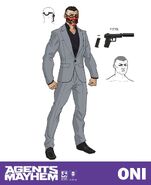 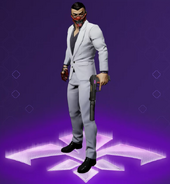 Retrieved from "https://agents-of-mayhem.fandom.com/wiki/Oni?oldid=3278"
Community content is available under CC-BY-SA unless otherwise noted.