Agents of Mayhem Wiki
Register
Don't have an account?
Sign In
Advertisement
in: Agents, Gangsters, Saints Row Characters,
and 5 more

Pierce Washington, A.K.A. Kingpin, is a M.A.Y.H.E.M. field agent and a part of the Firing Squad, alongside Oni and Scheherazade. He is one of the Saints Row characters that appears in the Agents of Mayhem universe.

As the current acting leader of the Vice Kings, a week before the Devil's Night Pierce successfully unified all the gangs of Stilwater under one flag by making a deal with them. During the Devil's Night, Kingpin and his lieutenants stood as a united front effectively defending themselves against L.E.G.I.O.N.'s Ministry of Gluttony.

Kingpin's vehicle is a Custom Neuron, possible a reference to Saints Row The Third as it was a car he told you to customize in one of the first missions, His Vehicle skin is called "Platinum Record" and is primarily Golden in color, with a different spoiler 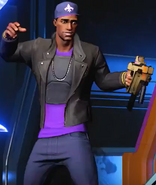 fanart done by elsevilla, as part of the DeviantArt's After Hours project

Kingpin fanart done by GENZOMAN as part of the DeviantArt's After Hours project. 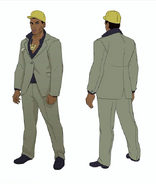 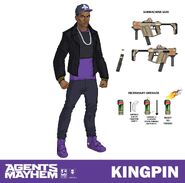 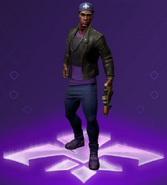