Agents of Mayhem Wiki
Register
Don't have an account?
Sign In
Advertisement
in: M.A.Y.H.E.M., Agents, Field Agents,
and 3 more

Joule, A.K.A. Cosima Bellini is a M.A.Y.H.E.M. field agent and part of the Bombshells, alongside Rama and Red Card[1].

To unlock Joule as a playable character, players need to complete Operation: Technologia.

The daughter of a rich and wealthy titan in the fashion world and one of the most brilliant engineering minds in Europe, Cosima worked hard to live up to both her parents' legacies. But when L.E.G.I.O.N. went after her father's work, her parents went into hiding. But Cosima? She went to the front lines and joined M.A.Y.H.E.M.[2].

Joule's mayhem ability, Safeties Off, has her deploy a super powered turret that emits a huge pulse which Staggers and damages enemies but heals her base turret.

While Joule's beam weapon, Beamer, continuously inflicts damage, it charges up and deals increased damage until it hits a cap. The beam also has an increasing chance to make enemies vulnerable.

fanart done by CGlas as part of the DeviantArt's After Hours project. 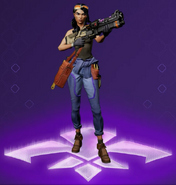