Trevor Devall[1]
Roderick Stone, A.K.A. Hollywood, is an M.A.Y.H.E.M. field agent and part of the Franchise Force, alongside Hardtack and Fortune.[2] He is in charge for the PR work of the agency.

Hollywood is one of three playable characters available at the start of the game.

Rod Stone is an aspiring actor, a bounty hunter and a reality TV star. With his current title being "Face of M.A.Y.H.E.M.", Hollywood is in charge of the agency's PR department.

At the beginning of his career, Rod was an adult film actor[2], making an appearance in a pornographic film Deep Under The Covers under alias Gregory Prickinton.[3]

Hollywood's constant showboating gets him in trouble with Persephone and she has had him sent to HR more than once. His fellow agents, Friday, Fortune and Hardtack are constantly annoyed by him as well. He gets along okay with Kingpin, helping him boost his social status. He also annoyed Gat while attempting to talk in police code, to the point where Gat threatened to kill him in his sleep. He and Daisy have an on again- off-again relationship.

Hollywood's mayhem ability, Blockbuster, is Hollywood's own Michael Bay movie. He puts on on a pair of shades and dominates the enemy, with the help of unnecessary background explosions and gained 4 stacks of Fortify. During this time, he also has gained a infinite amount of ammo.

Hollywood uses an assault rifle as his main weapon. The default ammo capacity of his weapon is 34 rounds.

The default damage of the rifle is unknown.

Appearance of his profile on the old AOM website.

Deep under the covers poster 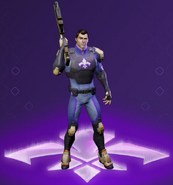 Retrieved from "https://agents-of-mayhem.fandom.com/wiki/Hollywood?oldid=3340"
Community content is available under CC-BY-SA unless otherwise noted.