Agents of Mayhem Wiki
Register
Don't have an account?
Sign In
Advertisement
in: Agents, Franchise Force, Field Agents,
and 6 more

Hardtack, A.K.A. Ishmael Funderburke, is an M.A.Y.H.E.M. field agent and part of the Franchise Force, alongside Fortune and Hollywood.

Hardtack is one of three playable characters available at the start of the game.

When L.E.G.I.O.N. attacked the USS American Eagle and its carrier strike group, CPO Ishmael Funderburke fought bravely to save his crewmates. Now as an Agent of MAYHEM, Hardtack takes the fight back to LEGION to avenge his fallen crewmates.

Hardtack's MAYHEM ability, Depth Charge, charges his ammo drum and can fire a limited number of mines. At any time, even after the drum is empty, you can use press MAYHEM ability button again to detonate the mines.

Hardtack uses USS Shotgun as his weapon of choice. He loves to get up close and personal with his short-range shotgun, which has shots that hit enemies near the target as well.

He has a friendly rivalry with Braddock as they represent different branches of the US Military.

Facing off against Doctor Babylon's golem 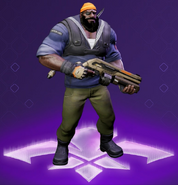