Agents of Mayhem Wiki
Register
Don't have an account?
Sign In
Advertisement
in: Agents, DLC Agents, Law Enforcement,
and 8 more

Daniel Dae Kim
This article is for Agents of Mayhem's version of Gat, for Saints Row version see Johnny.

After the climactic events of Saints Row: Gat out of Hell, Gat is back in Seoul, the place of his birth. Gat’s been hard on the beat in this universe as a Lieutenant in Seoul’s police department, but the tragic events of Devil's Night left Johnny in a coma. After awakening almost a year later, Johnny discovers that all of the Seoul Metropolitan Police Agency have been wiped out and replaced with C.O.P. robot units.

But Persephone Brimstone was aware of him, and immediately recruited him, recognizing his reputation for wanton destruction made him the perfect fit for M.A.Y.H.E.M.

During his MAYHEM ability, Cannonization, Gat busts out his deadly hand cannons. For the duration of the ability, Gat is Immobilized but will auto-lock onto targets. 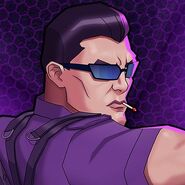 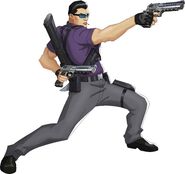