Piper Andrews, A.K.A. Daisy, is a M.A.Y.H.E.M. field agent and part of the Carnage a Trois[1], alongside Braddock and Yeti.

To unlock Daisy, players need to complete Operation: The Morning After.

Growing up in a house full of boys, Piper Andrews learned to defend herself early on. When it came time to pick a path in life, she opted for a run in the military. She enjoyed her time there, and learned a lot about heavy weapons and machinery, but found the rules and regulations far too restricting.

After the military, she had a hard time finding a job she enjoyed. Enrolling in a derby girls team as a hobby, though, Piper finally found something she not only loved but was damn good at. She found out about the M.A.Y.H.E.M. through a friend, who vouched for Piper as the best heavy weapons expert out there. Persephone gave her a shot and it's been magic ever since.

Daisy unleashes the full potential of her Heavy Mini. While in Jammer Mode, her gun does not build up heat and has an increased rate of fire and damage output.

Daisy's minigun sprays a devastating barrage of bullets. While not precise, she still manages to deal a lot of damage. Watch for that heat build-up though! Use her Special Ability to cool it down. 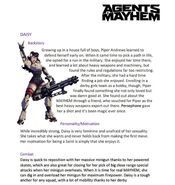 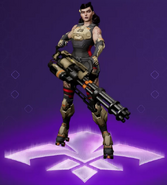 Retrieved from "https://agents-of-mayhem.fandom.com/wiki/Daisy?oldid=3387"
Community content is available under CC-BY-SA unless otherwise noted.